It's about 1.00am on Saturday. I've just finished preparing for my craft fair tomorrow, so thought I would come on and share the rest of my creations! I've really enjoyed making the gifts this year, more so that cards. I would like thank Helen at It's All Fiddle Fart for giving me so much inspiration, and also to Lisa over at A Day in the Life of a Craft Fairy 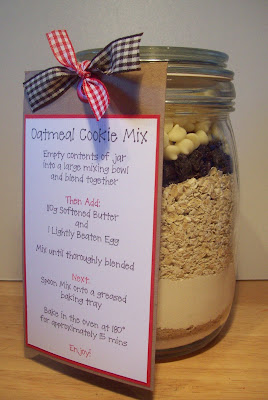 I was inspired to make this jar of cookie mix after seeing it on Splitcoast Stampers last year, but never got round to it then. I came across some of these wonderful Kilner Jars whilst shopping in Asda a few weeks ago, and they were just £1 each! For a huge 1l Jar! I bought about 10 of them! I know Tescos/Hobbycraft are selling them for £2.50 each! I found a good recipe here which is perfect for this size jar. I have layered in the ingreedients and made a simple label for the jar. I don't think it needs any more decoration. The pretty layers do all the work! I have baked up a batch and will be taking a few tasters along to display alongside the jars! 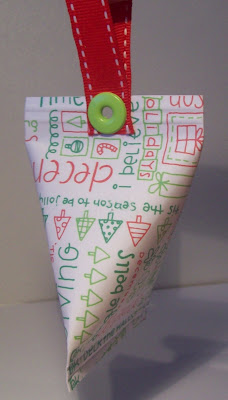 I bought a few boxes of the festive peanut M&M's. I didnt know what to do with them, so I ate a box. Afterwards, I had a flash of inspiration to make some of these sour cream pouches. I've never made them before and was amazed at how easy they are to make and how effective they are. I've used Doodlebug Christmas Doodles paper and have then added an eyelet and a ribbon, so that they can be hung from the Christmas Tree. I'm kind of hoping these don't all sell! 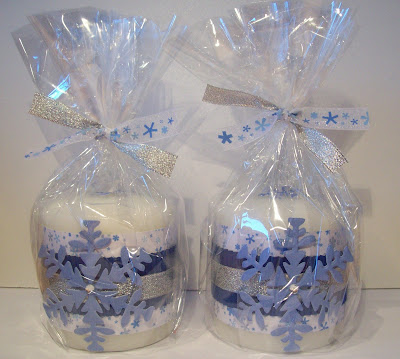 I found a couple of cute stumpy candles in the 99p shop, which I decided that this year I would decorate and embellish rather than sticking to the stamped candles which I made last year. I invested this year in a roll of Cello wrap from hobbycraft which I think makes displaying them a lot more appealing! 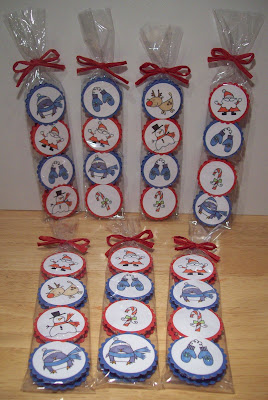 These are my little Elizabeth Shaw chocolate mint's which I've made using some of the Pink Petticoat Mini Christmas images. Sadly though I don't have the nesting punches, so each one of these has been cut using my nestabilities, one at a time! It did take a long time to make them, but I think it was worth it in the end! 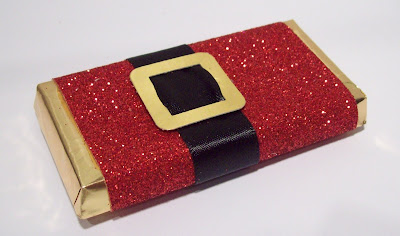 This is a mini chocolate bar which came in a pack of 4 from Tesco's. I decided to re-cover them using my lovely sparkly red glitter paper and made a little santa belt for them using some black ribbon and a gold buckle. I've had that punch in my drawer for a long time and I think this is the first time I've used it! I have made a couple of green one's too, so Santa has his little Elf! 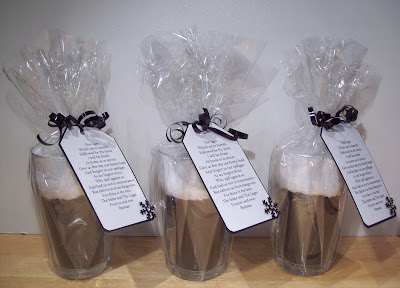 The next idea, I got from Little Pudding's Nappy Cakes blog, which I thought was a fab idea! Again, on my trip around Asda I decided that I would have a go at making some of these. I picked up a pack of 4 pint glasses at £0.88p!!! A pack of 4 white Asda value flannels and a pack of basic men's black socks. This was so simple and easy to make, It took me mintues to make all of them! I then searched a few blogs and found one (sorry cant' rember who) that had attached the beer drinkers version of the Lords Prayer as the tag. I've wrapped them in cello wrap and added a little black snowflake to the card, just to Christmasify it a bit! Although they would be great for any occasion! 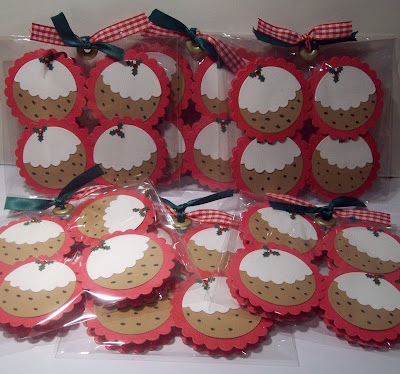 As If I hadn't had enough the first time round, I decided to make more of the Elizabeth Shaw style mints, only this time I decorated them as Christmas Puddings after seeing the post on Helen's blog. They took a lot longer to make than I'd imagined too! I must remember next time!

If you have managed to get to the end, then thanks for reading and I hope that these may inspire you as the did me!

Lots of brilliant makes Zoe .. .. I hope that your craft fair is a great success.

Thanks for sharing Zoe! You sure have been busy. I love all these ideas, especially the pint, I've not seen these before. Helen has been a real inspiraion for me this christmas as well, and I too have enjoyed making gifts aside fom the regular cards! Hope the craft fair goes well!
Hugs, Vicky ~x~

You've been very busy!! Good job hope all goes well at the craft fair!! I love the cookie jars and the santa cho bar!! I will def be going to Asda today and getting some lol!! TFS

Super projects as always Zoe. Love them all especially the cookies in a jar. I got some jars from Ikea to have a go at them but haven't gotten around to doing them yet.

I hope the fair was a big success

Love all your projects. Wish I had seen some of them earlier to raise funds for the pre-school I work in. However I have set to and made some christmas puds to give as presents to some of my work colleagues. Hope the craft fair went well. Keep up the good work.
Have a great Christmas.

What a fab set of goodies!! Such a variety of ideas and they all look so professional. Great inspiration for next year!! x

Hi Zoe
I am so sorry for not replying to you about the jars and sharing the recipes. I have lots more recipes although its probably too late now. I haven't really been around blog land for a while and now I can't post any new items on my blog at the moment. Feel free to email me if you would like the other recipes. Hope the sale went well. i bet your stall looked fab....sorry again sally.astill@hotmail.co.uk.
Hugs Sally xxxx