I've finally got round to photographing some of the items I've made for my Christmas Craft Stall. Here is the first, my Reindeer Noses. I first saw this idea on Splitcoast Stampers. I love the idea of the 8 brown and then the 1 red (Rudolph's!) nose! The brown one's are Malteesers, and unfortunately some of them did not pass quality control so had to be eaten! 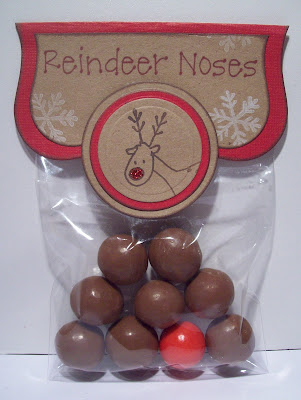 The red noses are bubblegum, which I found in a set from Poundland! I couldnt actually find anything else which was the same size as the malteesers and red. I did buy a pack of chocolate "Reindeer Noses" from Morrisons, but when I opened the pack they were more orange in colour than red so I decided not to use them. 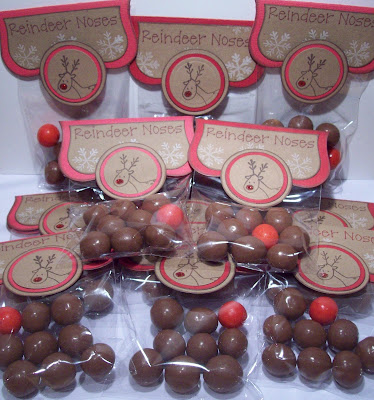 I've used my nestabilities labels one die to make the bag topper. The reindeer is stamped using part of an Elzybells stamp.

I will be back shortly to show some of the other bits I've made.

Awww, gorgeously packaged Zoe, can't wait to see your other items too!

these are fantastic zoe :D

Good luck with the craft stall hun..Loving all your latest creations especially the reindeer noses..how cute!!

Very creative mind. your all blogs are fantastic.