Well a couple of weeks ago I decided to make a start on a few Christmas Cards. I saw a card on the docrafts forum using the christmas pudding stamp and I thought I've got that stamp! so I went into my craft room and had a rummage and I found it and thought I'd have a go seeing as I've never used it before! 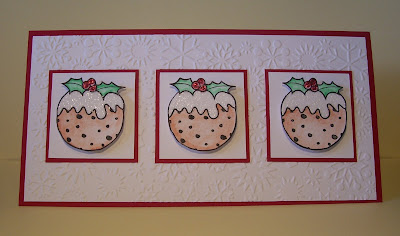 I stamped the image and coloured with my watercolour pencils and then used embossing powder to add a bit of sparkle. They are each mounted onto foam pads and layered onto white card which has been embossed with the cuttlebug snowflakes folder. 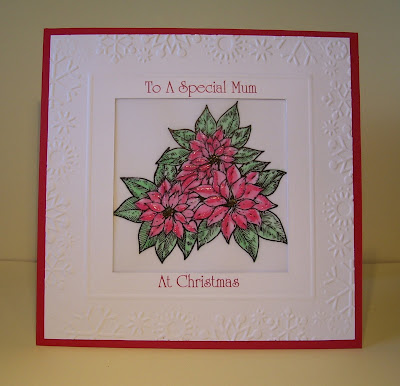 Using the same image as I've used on a candle rencently, I made this card for a lady to give to her Mum. I've used my whispers pens to colour it in and again I've used some embossing powder to give it a bit of sparkle. I cut the centre out and have embossed some lines round the edge and have then emobssed with the snowflakes folder. The sentiment was printed directly onto the card before any cutting/embossing! It took a few goes to get it in the right place though! 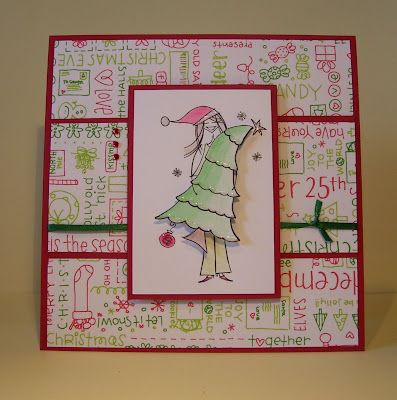 This is my first card using one of the Pink Petticoat christmas images. I've been looking forward to making one since I bought the kit back in the summer. I've coloured her in to match the paper in two tones of green and red. I've decoupaged the tree for a bit of extra dimension and added some embossing powder too. The paper is Jolly Doodles by Doodlebug. I can't get enough of Doodlebug when it comes to Christmas! I love it! I have the Snowy Doodles set too which I used a lot last year. All the red card is Doodlebug Crisscross too so they co-ordinate perfectly. 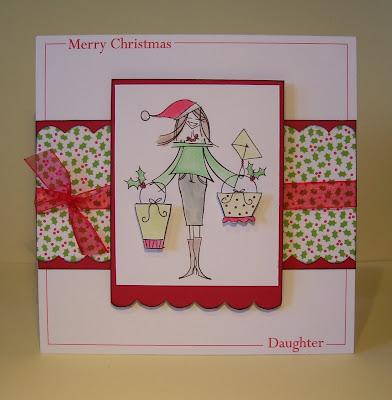 This is another Pink Petticoat image, and again I've decoupaged the shopping bags for a bit of extra dimension. The holly paper is by Doodlebug. I printed the sentiment directly onto the card. 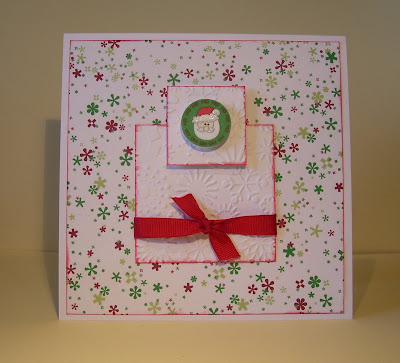 And for this one, I've recoloured the paper in paint shop pro as I have it in the blues but everywhere was out of stock already in the red and green! It took me a while but I got there in the end! This is a layout I used last year too. 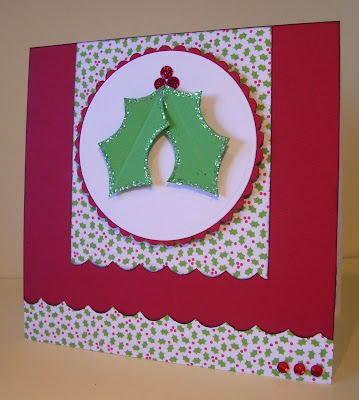 And finally, I decided to have a go at this card after seeing a preview of Kath's card on her blog recently. I haven't got a holly punch so I just drew a leaf and made a template of my own. I cut out the leaves from doodlebug card and scored a line down the centre. I then glittered the edges and stuck down with foam pads. The berries are punched from a sheet of adhesive glitter card. The Holly paper is again from Doodlebug!

I like all of the cards, but I especially like the one for your Mum. I see you will be celebrating a mementous birthday soon. Happy Birthday! Sure wish I was 30 again!

What fantastic cards!! I especially love the Christmas puddings. Stunners, every one of 'em.
Viv xx

These are all great cards, I love the papers too!
Clairex

Hi Zoe, don't know if you remember me from do crafts. I have just set up a blog. I have added yours to mine, hope thats ok.
I love all your work, its fab!
Oh and A BIG Happy Birthday!
Erin x

Ihave been tagged and i'm passing it onto you!
details are on my blog!

You have been busy, I especially like the Pink Petticoat cards but they're all lovely

Lovely cards Zoe, I also have these PP images, I must dig them out and get some Christmas cards done with them. Sue.x

Hi Zoe, You blog is fab. I have gave you the Love Your Blog Award. Check it out on my blog.

Lovely cards, I really like the Christmas pudding one :)

Gorgeous cards Zoe. You have been busy. I need to get a move on too. Hope you are well. Hugs, Lainy xx

Hi Zoe, there is another award on my blog for you.
Erin x