Not really sure where to start.....

.....so here is as good a place as any! I've had quite a productive card making week this week. I've spent quite a lot of time looking through my Stampin Up catalogue, not that I can afford to buy anything, but it doesnt cost to dream! And that led me to spend a lot of time over at Splitcoast Stampers. I've tried a couple of new techniques, for me anyway, and I'm actually really pleased with the results, which makes a refreshing change.

First of all I've made a criss-cross card. I've also made a little stand for the card as I think it looks better when its all together. I'm really happy with this card and was suprised at how easy they are to make and how effective they look. This is the first time I've ever used these papers, they are part of a making memories set I got when I was in America in 2007! 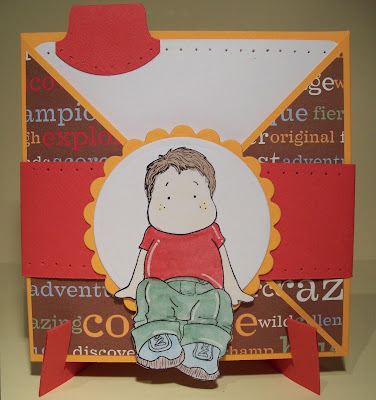 Whilst I had the papers out, I thought I'd make more use of them with another Edwin image and this time I've tried the joy-fold card. This is a great layout, and one I'm sure I'm going to use a lot more. Its quite hard to get a clear picture of how the card opens, but basically the Edwin image opens to the right and then the red panel opens up to the left. It's like a card within a card. 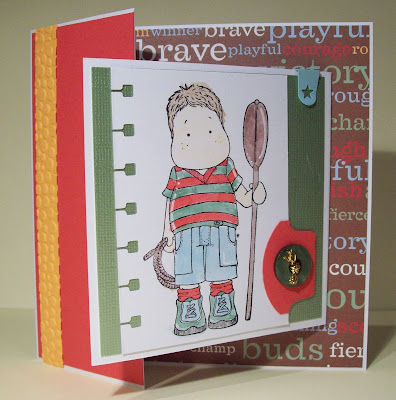 I saw a card on SCS which really inspired me. It basically had a stamped tree/leaves image in a circle with a sentiment and that was the main feature of the card. Immediately I thought that I could re-create something similar using the magnolia stamp I got in the Christmas sale, and here it is! This was my first attempt, using a pink and black colour combination which I really like. The sentiment is from a 99p Studio G set. 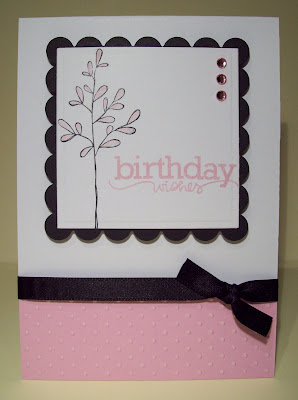 And here is another attempt, only this time I've printed the sentiment from the pc before stamping and cutting out the squares with my nestabilities. I really wish I had some more sentiment stamps, they are at the top of my wish list but the pc ones will do for now, it can be a bit of a pain having to print them off though. I love this colour combination of dark brown and a sage green. To colour the images all I've used is my Whispers pens and a blending pen. 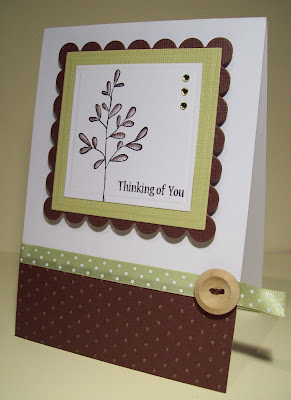 And again, but this time in burnt orange and dark brown, lovely! 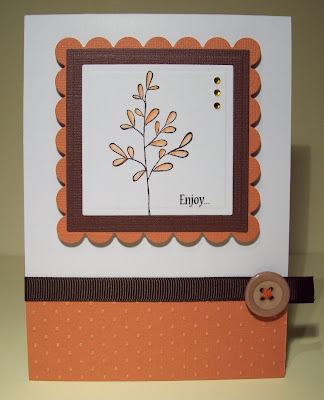 These cards were so simple to make and yet they are some of my favourites so far. I think I'll be using these colour combinations on a lot of my cards from now on. Also on the last three cards I decided that instead of making my usual A6 card which opens from the side that i'd flip them to a tent fold. I've made a few more in different colours, so I have a whole set of them, but these were just a few of my favourites, I didnt want to bore you with all of them!

As I said I've had a very productive week and there are even more cards that I'd like to share with you, but I'll save some for another day. I didnt realise until I started blogging them, quite how many I'd made.

ZOe what fab cards and such a range of designs, you sure love those SU punches!!! Splitcoast is fab for ideas! Speak soon, Jules x

Brilliant cards Zoe, you really have been busy and it's wonderful to see the new techniques you've been trying, thanks for the inspiration! xx

Gorgeous cards Zoe, just been on Do-crafts looking at them. Sue x

These are wonderful! It's so nice to see some new designs, other than the bog standard squares we all normally make. I totally agree about SCS. I had a few projects to make this weekend so I virtually lived on there!

I totally envy that you can make cards quickly - I'm SO slow! Look sforward to seeing even more lovely makes! ~♥~

Beautiful set of cards, I do love that simple stamp and you have used it to such wonderful effect :o)
Jackie xx

Hi Zoe all your cards are stuning I especially like the ones for the baby, hope you dont mind me following your blog huggies June xx

Oh these are gorgeous Zoe, I love the Edwin cards, he is so cute and the others are beautiful so very effective. have a good day

Fabulous cards, love the Edwin ones but the elegant ones are gorgeous.

You've been very busy,but they are all gorgeous.

All are gorgeous but the simple ones are my favourite, love the colour combos and they have definitely insprired me - thanks for sharing your creations and I look forward to seeing more xx

Stunning cards, I love the clean and simple ones, gorgeous x

I love all your cards. The Criss Cross card and the Joy Fold because I haven't seen or tried these and the simpler ones for their simplicity and brilliant colours.

Lots of inspiration - thank you.

Wow! You have been busy! You've made amazing cards! I've got print outs to try some of these techniques, I think you've inspired me now to give them a go!

Lovely set of cards. I love the simple elegance of them.
Chrissie

Your cards are wonderful - you are truly talented!!

These are both absolutley stunning - I particularly love the orange one as that is one of my fave combos right now.

Blimey Zoe you have been busy. Lovin all your new cards.
Kerry x

Hi Zoe, you have been so busy these are all gorgeous cards, I love the edwin right at the top, and the layouts you use are gorgeous. Joey.x

Wow you have been busy, these all look really lovely, hugs Pops x x x

Good morning Zoe, wow, you've been busy creating hunny. What gorgeous creations too, i love the look of these cards they are all looking very sophisticated. Great work, thank you for sharing, hugs Linda x

Fabulous cards - I especially like the last three - I'm into white space at the moment (not that I'm any good at leaving it!!)
In case you're wondering aabout the influx of comments I'm desperately trying to catch up (lol)
hugs Heaether xx

OMG wonderful cards! i love them all! hugs nicky