I've been getting ready For Christmas! and its only October....

Well as the title says I've been getting ready for Christmas. It is a little early for me. Usually I don't make any Christmas cards until at least the end of November. I have however been really inspired by all the fab cards and gifts on Splitcoast Stampers and also I'm loving the use of Kraft card stock with white brown's & reds, by the Elzybells team. I'm severely lacking in funds at the moment so the option to buy all the gorgeous new Christmas stamps is just not available! So I've set about making some of my own embellishments using my punches and a pair of scissors! I'm actually really pleased with how they have turned out, but as yet have only made a card using the punched Robin. I thought I'd share them with you though, so here they are! I first saw a punched Robin card on Ruth M's blog which is what first inspired all my punched characters! 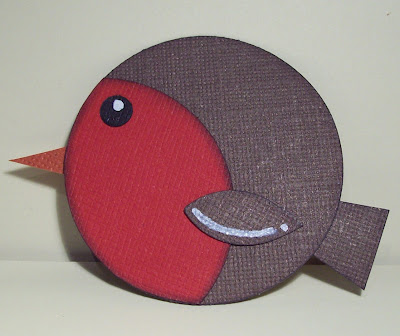 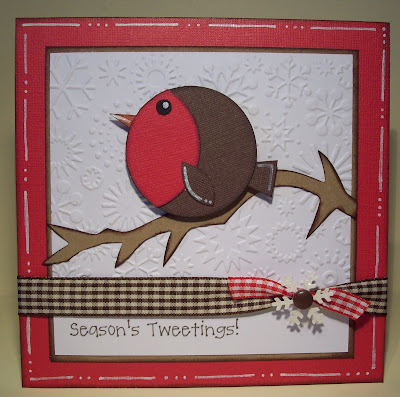 I wasn't really sure what to do with the little Robin once I'd made him but after a bit of inspiration surfing, I came up with this. Something quite simple really. I really love these gingham ribbons. I've stocked up as I have a feeling they are going to be the theme of my cards this Christmas! 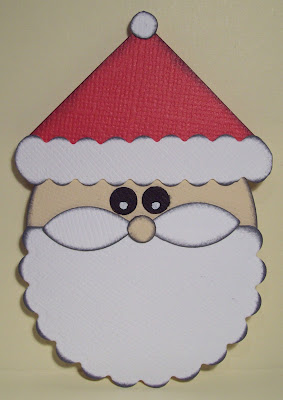 The main man! Santa! I had good fun making him. I'd seen a couple of examples but thought I'd adapt them to come up with my own version. I've used my nesties to cut out the beard and a flower punch for the moustache. I've inked all the edges in charcoal ink to give him a bit more definition. 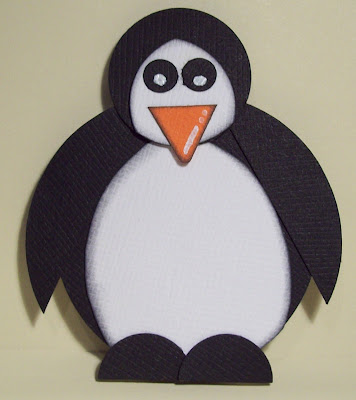 I love my little penguin! I didnt really know what i was doing when I was making him, so made him up as I went along. I'm really pleased with how he turned out. I think I might make a little bobble hat for him though or maybe a santa hat. 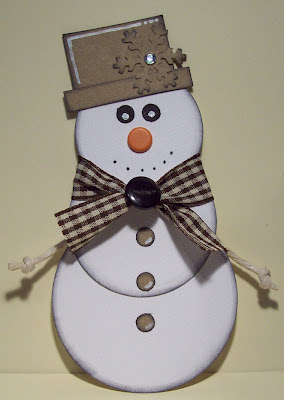 Frosty's not really a punched character! I used my nesties again to cut him out, but wanted to go for a bit of a rustic look. So I pulled out my gingham ribbon again and added a button as his scarf. I've used Kraft cardstock for his buttons and hat, all of which have been inked. I decided to go with an orange brad for the nose rather than trying to create a pointy carrot type nose. The string for the arms was an after thought. I'm really pleased with how it looks though. To finish him off I've just added some highlighting with my white marker pen. 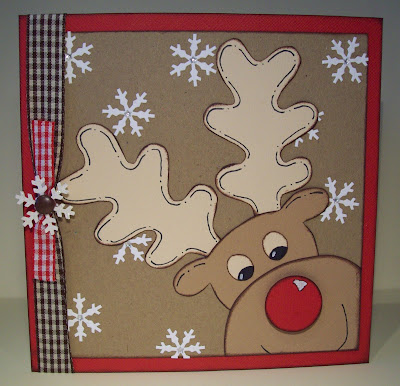 I saw Kath's card which had been made using the free template from papercraft inspirations which was what led me to make this card! I've used a combination of doodlebug card to make this card and again have inked all the edges to define him a bit more. I've used foam pads to stick his nose on to make it stand out a bit more and have highlighted it again using my white pen. The snowflakes were cut using a cuttlebug die, but I've now invested in a snowflake punch which is a lot less time consuming! Finished off with some star shaped adhesive stones in the centre of each snowflake. I never seem to use the stars so thought this would be a good way to utilise them! I then finished the card with some brown & red gingham ribbon topped with a sparkly snowflake and a brown brad. I wasn't sure whether to add a sentiment or not, but I dont think it really needs it! I think most people would gather that its for Christmas! I hope!

wow!!!! These are amazing and so clever too, what a fab idea to make the embellishments rather than go out and buy more stuff

hope you are both well! Been thinking about you

Zoe I LOVE all of these, how clever are you!! Fantastic, great to see you back, Jules x

Fab set of images and they are so bright and cheery :o)
Jackie xx

These are super cute Zoe, you are very clever to think up them all!! I might have a try myself as they look so good! Hope you and the baby are well. xx

Wow these are all fantastic, you clever lady x

I just love your snowman he is so sweet

Wowzer Zoe these are brilliant cards, love the lil robin best of all :)
Hugs Sonia xx

Love your christmas cards Zoe, especially the snowman and the reindeer! Hope you are well.

Oh my word, your punched Christmas characters are just fabulous! How clever and creative!

These are awesome - just stumbled across your blog from splitcoast. Darn, now I will have to spend half my morning checking it out. I LOVE IT when that happens!

Thanks for sharing your talent!