I was asked to make this card for a lady who sails ships for a living. I dont really have much other than my new sugar nellie pirate stamp, which I'v tried to make a bit more feminine by colouring it in shades of pink. 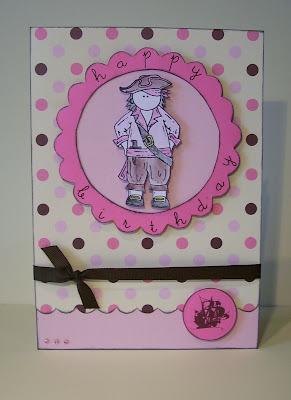 I've used the same layout that I used for one of my mum's cards as it was quite a simple one! The little ship is part of a font I downloaded recently, which I've printed directly onto the doodlebug card. I've used my mini Marks rubons, for the sentiment. They are by American Crafts and I got them from hobbycraft recently. Its a whole book of individual letters, its fab!

I'm not normally a great fan of Hobbycraft if I'm honest, but recently its been getting some really yummy stuff in, like all the American Crafts range and K&Company and I noticed today when I happened to "pop in" they have a lot more of the Making Memories range too. I held back though and didn't buy much atall.

I love this card Zoe.
I would never have thought of making a girlie card with that stamp but you have pulled it off brilliantly.
Fab layout and the paper is lovely.
Not a big fan of hobbycraft either but I might have to pay a visit and see if they have any new stuff in my local one.
kerry x