I've been having a play with my new Forever Friends stamps. I really love them and have spent hours just sitting colouring lots of stamped images in! Here are a couple of cards I've made using them, which I decided to keep quite simple. 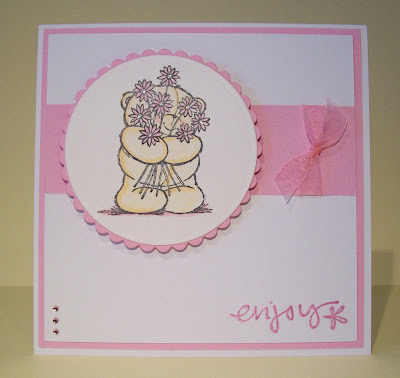 I wish now that I'd have used my embossing folders on the horizontal strip! next time I will do! 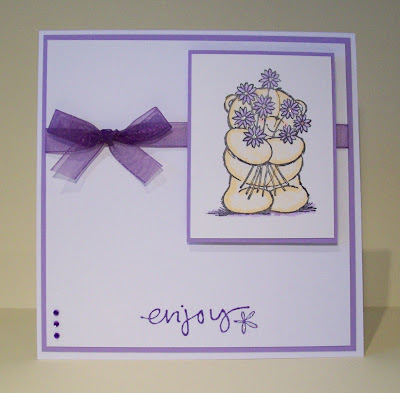 I think this one is my favourite. I really love the lilac and I think the ribbon bow finish it off really well. The stamp is from a 99p set from Studio G (Dovecraft) called Daisy Sentiments. I have lots of these 99p stamp sets they are great!

I've also been asked to make a sympathy card for a man who was a keen motorcycle enthusiast and they wanted some kind of a bike on the card. I've not been asked to do one of these before so it was a bit of a challenge coming up with the idea! I wanted to keep it reasonably simple for fear of it looking too much like a mans birthday card. 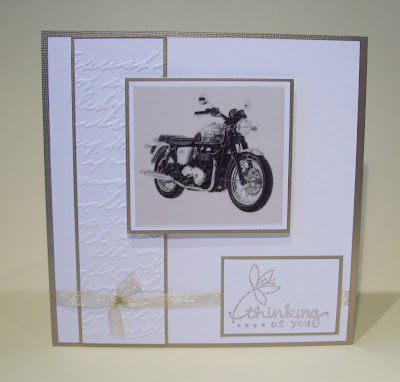 I found the image on Google and I edited it in Paint Shop Pro to give it an aged newspaper effect and also a sketchy pencil drawn effect, which is not very clear to see from the picture. I worked from the colours of the image and found a nice sheet of metallic DCWV card in Champagne and combined that with the white card. I've embossed a strip of white card in the cuttlebug script embossing folder and then I've stamped a sentiment in a bronze ink which happens to co-ordinate perfectly. The sentiment stamp is from another set of the Studio G 99p stamps. I like this one!

They're all gorgeous. love the colours on them too. Denise x

These cards are just amazing. I really love the layouts and colours.
xx :0)

What a cute image, I love it....
That's a beautiful card!