I've had a busy day today. I was asked to make a card for a little boy who is going to be 5 soon and I've spent nearly all day making this card! I have no idea what his favourite characters are or anything so I thought I'd play the safe option and go for Dinosaurs! I did a search on the internet but all I came up with really were the Basic Grey Archaic dinosaurs. I then remembered seeing some cards and toppers made using them in a magazine, which I think Jo Kill did, so I dug out the magazine for some more inspiration. 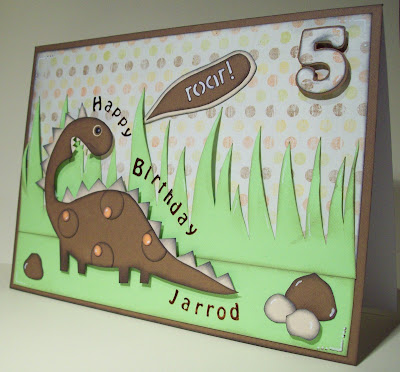 Rather than go out and spend more money I decided that I would have a go at making my own paper pieced dinosaur. So I got out my trusty doodlebug cardstock and set about making a template. I've kind of copied the Basic Grey one, but have drawn it all freehand. I've inked all the edges, hopefully making it stand out a bit more. I have decided to call him George, don't know why really, he just looks like a George! I think I've fallen in love with him. I'm so pleased with how he's turned out. 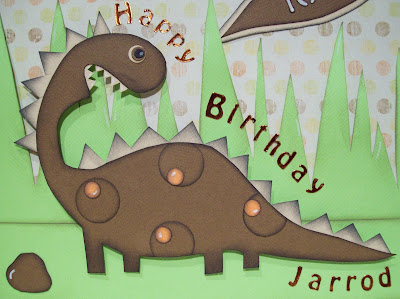 I'm not so happy about the rest of the card though. The inspiration stopped at the dinosaur! I used a Shabby Princess paper for the background which is in tones of brown, green and orange. I cut out a few small pieces of card which I've inked and hopefully they look like rocks! I was a bit stuck when it came to the sentiment. I dont have many sentiments stamps and by the time i was ready for it, it was too late to print one off the computer, So I've just coloured some peel offs brown.
I hope you all like him!

Hi Zoe, lush card, dino turned out fab! I'm sure the little fella will love it too! :D xx

George is gorge! How fab is he?! Your rocks look great too you clever lady :o)

Zoe I think the whole thing is fab. JUles xx

Oh he is wonderful and the background is brilliant, how on earth are you going to be able to part with him.

What talent! George is fabby... but then so are all your cards!
Chrissier

Gorgeous card! Love it and your dino is fab!!
If you check out my blog there is a little something for you!
hugs,
Alex

I love it, such a cool card for a little boy, and well done on drawing it free, no chance I would be able to do anything like that.xxx

Hi Zoe, Great card and George is fab. I'm sure he is going to luv it. x

The whole card is gorgeous Zoe, the colours and composition are great and your little Dino, George is super.
Keep drawing your own images - it adds a real sense of achievement I think.
hugs Heather xx

very very cute card! have a little something on my blog for you....xx

Fab card. i've left a little something on my blog for you.Denise x

Hi Zoe, doing a bit of catching up as I've been without broadband for a few weeks. Love your FF cards, I have these stamps too and think they are so cute.

Well done with your dinosaur card, I think it's fabulous and will be loved. Sue.x

This is wonderful Zoe!

If Jarrod isn't as pleased as punch with this card, I'll bite my bum!!!
Viv xx

I'm with everyone else, the card is fab and I love George

http://www.images.dgreetings.com/newimages/newyear/2005/new-year-floral1.jpg
I have read some of your posts. I would revisit, as I liked your writings. I have send message to you in FACEBOOK, too.

another Blog
LIFESTYLE AND RELATIONSHIP