I'm on a Roll this week!

As the title indicates, I've had a pretty good card making week this week. I've made quite a few by my standards! First of all though I want to share with you my new ribbon/embellishment organiser! Its a rotating carousel, which has five layers which contain a total of 60!!! round plastic storage pots! Its fab. I saw it in a shop a couple of weeks ago but they had all sold out so I've had it on order since then. The moment I saw it I thought it would be perfect for storing some of my ribbons. It only cost £12.99, a real bargain! 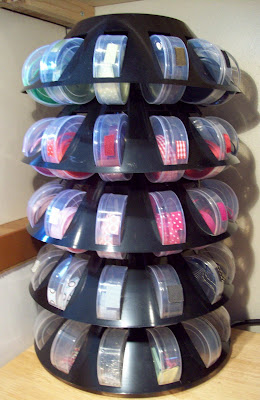 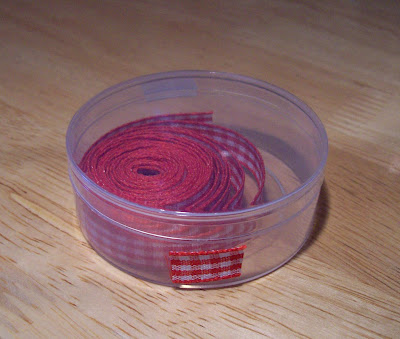 So to start with a few cards, here are a couple of the more masculine cards I've made this week. 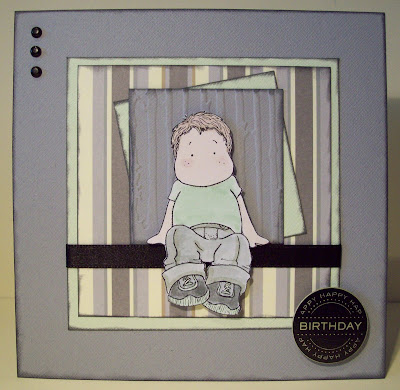 I stamped and coloured a few of my new Edwin stamps to co-ordinate with these Laura Ashley papers. The layout just came to me in a flash of inspiration, which doesnt happen very often! and although at the time I wasn't all that happy with it, now I really quite like it. The sentiment is from Craftwork Cards and has been inked with green ink. Edwin is mounted on foam pads. 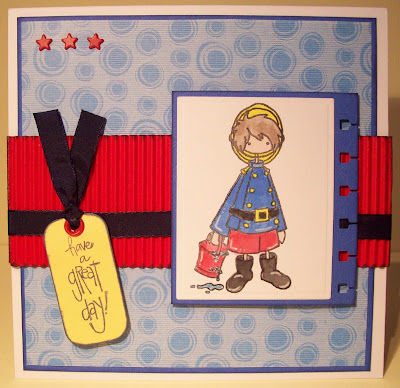 I bought Harry the Fireman a few months back and this is the first card I've made with him. He is of course one of Kerry's fabulous stamps which you can buy from Spiral Whisper. I've used my trusty Stampin Up spiral punch again! The background paper is part of a DCWV stack but I thought it ties in quite well with the fireman image as it looks kind of watery to me! 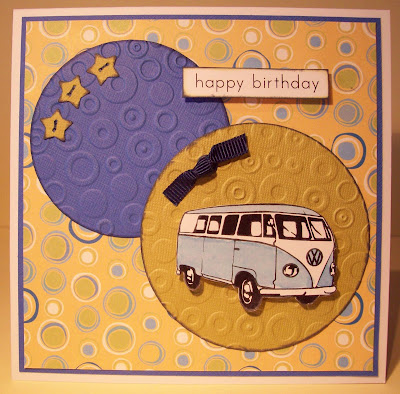 This card didnt go quite as I'd planned it either, but again I like the result so that can only be a good thing! I love this Camper Van stamp, I have the mini one too! The paper is again from a DCWV stack and i thought it looked quite retro and this is what led this card! I cut some circles using my nestabilities and then embossed them with my cuttlebug circles folder. The two circles are joined using an eyelet, but i've hidden it by tying ribbon through it! The stars are just punched card which I've put some holes in and drawn a line between, hopefully making them resemble buttons. That was the aim anyway! 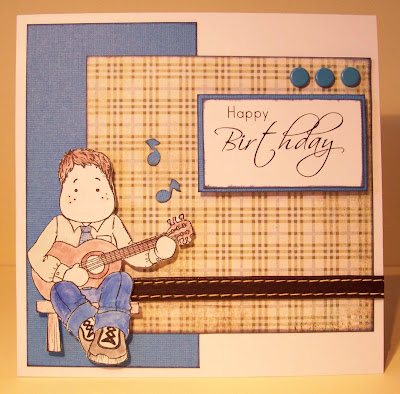 And finally, my lovely guitar playing Edwin. I coloured him in ages ago and he's been sitting in my stamped images box ever since, poor thing. So I decided to do the decent thing and put him on a card. The papers I believe are from the Basic Grey Archaic collection. The brown strip across the card is actually stitched leather! One of my good friends gave me what must be about a 5 metre length of it in a bundle of things she'd collected for me. Another quite simple card, but I really like this one too! I like it when I make cards that I'm actually pleased with. Too often I'm not happy with the end result so it makes a nice change.

Sorry about the quality of the last two pictures, the light has not been great here today!

I think I'll come back tomorrow and post some more cards as I've made more than I thought!

Congrats on making all these lovely cards - wish I had been so successful this week! How amazing is that organiser?! I totally need one of those! ~x~

Fantastic cards Zoe, I especially love the camper van!
WOW! Your ribbon storage is amazing and such a bargain price too! xx

Lovely cards Zoe. I particularly like the shades of grey in the first one.
That storage unit is pretty fabby. I am such a messy crafter, I could do with more storage solutions!
Chrissie

What a great container for your ribbons, would be great for brads and such too. Lovely cards too.