My Baby is nearly 2!

This card is for my baby, he'll be 2 on 3rd July! I can't beleive he's grown up so fast ;-( He loves Dora the Explorer, Diego and Roary the Racing Car! I was going to make a Roary card like I made for my friends little boy a while back but decided to go for Diego instead! I think I will do him a little Diego themed birthday party too. 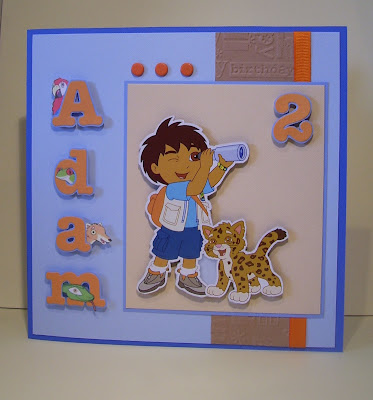 I wanted to make it a bit special so I've made this card 8" x 8" square. I've had to make a spine to stick the two pieces of card to as the largest card I have is about A4. Only problem is I dont have an envelope to fit it! I'll have to have a look on ebay or make one myself. The Diego picture is actually recyled from one of his easter egg boxes. All of the cardstock is Doodlebug crisscross. I've got my sizzix alphabet out and cut out his name and the number and then I've layered them onto another blue card and cut round them individually, it was fiddly and took a while but he's worth it! I downloaded the little animals from the internet and stuck them into the letters. I really like this card and I'm sure he'll love it.

I think I need a rest now!

It's brilliant, of course! And happy birthday, little man! xx

Oh this is just gorgeous and I just love the image and colours Happy Birthday to Adam. Sue :o)

Cute Card and i love the idea of using images from easter egg boxes hadnt thought of that one! I hope Adam has a wonderful birthday xcx

Its a fantastic card, your son will love it!!
Clairexx

This is FABULOUS, I love it and so would my youngest who adores Diego, great job. x

Zoe my 2 and a half year old daughter looked at these...and said...mine!! I hope your son has a lovely birthday. Your blog always makes me smile,x

This is brilliant Zoe. I'm sure that Adam will love it. I hope that he has a very happy birthday when it comes!

Fantastic card Zoe, I'm sure your son will love it you are so talented all the different ideas you come up with Jill x