Hey Hey I Wanna Be A Rockstar!

I've been having a go with the DCWV Rockstar Stack I bought a couple of weeks ago. I absoloutely love this stack as its got some fantastic card in it, some of which is foiled and some is flocked. First up is a card I made for my little boy to give to his Grandad for his birthday as he's a keen guitar player. 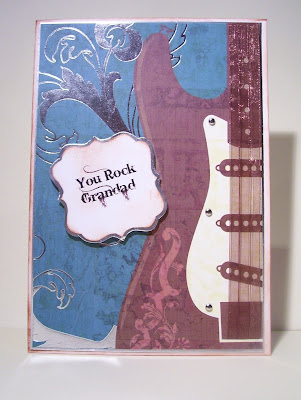 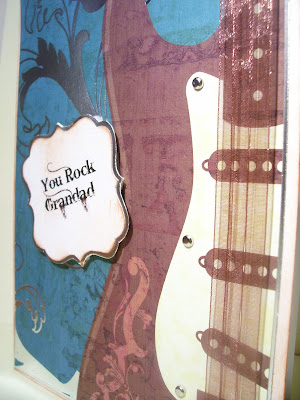 The card does most of the work itself so I've just embellished it with some 3mm brown organza ribbon, to give the effect of strings. I've also added 3 small silver brads. The greeting is printed from the pc onto white cardstock using the "Bleeding Cowboys" font, which I've then inked in brown to give it an aged look and mounted onto mirror card to bring out the foil in the card. I saw the shape the greeting is printed on in a magazine a while ago and thought it would be perfect for this card and after much searching I found a template on the internet which I printed off and now use to draw round and cut out. 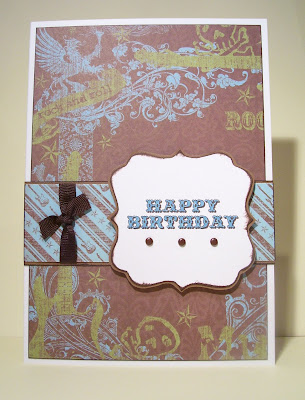 This is my second attempt with the same stack. This time I've printed the greeting off and coloured it in so it co-ordinates with the colours in the card. 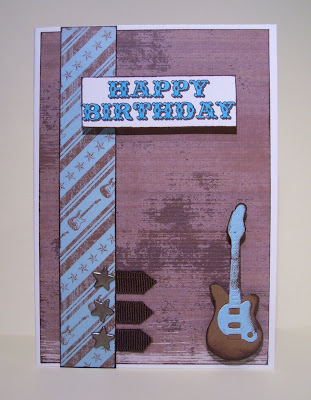 And finally...this one is just made up of the bits I had left over. I cut out the guitar using my ellison die and inked it to make it look a bit grungy!

I'm pleased with how these have turned out as I really struggle with men's cards.

These cards are fab, great attention to detail with the ribbon as the strings on the first card. x

Great cards Zoe, love the colours - they are all fab! I have added you to a link on my blog, hope that is ok. Your cards are great! :0) x

really great cards, I'd struggle with those papers but I really like your cards